Shelley came to us in 2016 for general health promotion and maintenance. The journey that followed between then and now has been a roller coaster ride and her strength, commitment and resilience to her health is inspiring.

A bit of History…

Shelley has always been health conscious. She was lucky enough to grow up in a family that always had a fridge packed with healthy foods, she never ate McDonalds and was overall healthy. She was also always active. Sport was a huge part of her life and nutrition and health were always good ways to support those activities. She is passionate about the outdoors, especially ski mountaineering which has taken her to remote places all over the world, like Japan, Antarctica, the Arctic and Patagonia.

“In the last 10 years I’ve suffered some significant traumas that led me to deeper inner healing. There was a sudden break up from a long term partner, a quick return home from Japan and then the diagnosis of stage four cancer of my Mum. I cared for her for 10 months, which was an absolute privilege. The grief in the years after she passed was intense, heavy and an extremely tough time for me though.”

After her mum passed away Shelley decided to attend a retreat in Thailand. It included raw food, meditation, education, daily saunas, massages and last but not least, self administered Colonics (enemas). “Funny story – after administering my first one (without guidance) I lasted 1 minute and was completely traumatised and ran back to my room crying! Don’t worry I got there in the end. I absolutely loved the retreat and I felt like it really helped me.  I floated out of there on cloud nine. I actually ended up going back 3 times within 18 months!”

Shelley realised it wasn’t practical to keep returning to Thailand for health retreats and she soon realised that she needed to integrate what she had learnt during the retreats into her everyday life. A beautiful little cafe opened up in Manly called Ora. It has a fantastic health philosophy and is full of nutritious, organic, whole foods. Shelley didn’t just find a healthy place to eat, she found a community.

“It fulfilled so much more than I ever could’ve imagined and the cafe soon felt like my dining room and the team there are now family. I met many like minded people and it was through this network that I was introduced to pH Clinic.”

Shelley first came to pH for regular Colonics and Infrared Saunas. She felt very at ease with the staff, it quickly became a regular place she came for treatments and recommendations for supplements to support her health. She has since discovered Kinesiology through the recommendation of the staff.

“I had done a lot of therapy, studied Gestalt (form of Psychotherapy), taken part in and facilitate The Self Love Project and looked after myself mentally. I had done the work. Natalia still helped me significantly. She comes with a warm, safe energy and was able to target the right stuff really fast. She quickly became another key support and I love checking in with her at different stages to help me redirect and refine.”

A “Lump” In the Road

At the end of 2018 Shelley was having a Colonic with the lovely Abi. “Abi is an extremely nurturing, wise woman who always made me feel very relaxed.” Whilst Abi was massaging Shelley’s abdomen, she felt a lump. She gently alerted her to the lump, making sure not to worry her. Abi showed her a diagram of the abdominal cavity to help her understand structurally where everything was and that, there shouldn’t be anything in the area of the lump. She recommended she see a doctor. Shelley didn’t feel particularly worried, she had a lot happening in her life at that time. She was heading off to Patagonia on a ski expedition, her 40th birthday celebrations soon followed with Christmas and summer close behind.

That summer she noticed her motivation levels had decreased, she was urinating more frequently and not drinking a lot of water. She thought she might have Type 1 Diabetes as her Dad had late onset around the same age – that wasn’t the case. She subconsciously noticed herself touching the lump and noticing it more. It had quadrupled in size since Abi originally discovered it, so she finally decided to go and see the doctor. This quickly lead to ultrasounds, MRI’s etc. She went back to the doctors and was told that she has a large tumour. It ended up being the size of 3 x tennis balls with another tumour behind that was the size of 1 x tennis ball. When she heard the news she had a real physical reaction, vomiting in the doctor’s surgery. She was then told she was going to have an operation in 6 weeks time, which felt like a really long time to wait.

During the wait she went to see a holistic doctor who recommended Infrared Saunas 3 times a week, initially an all fruit diet to take an organic acid test to be able to tell her what her body needed.

“Throughout this anxious time I knew it was more important than ever to look after my mental health. So I made sure I was disciplined with my healthy habits and committed to:”

She committed to all of this to ensure she was laying the best foundations for what was to come. The hospital represented her start line and she just wanted to get there healthy and happy, which she accomplished.

Shelley underwent major abdominal surgery in September and spend 13 days in hospital recovering. It was a foggy start with lots of pain medication and while she didn’t have any real answers yet, she was surprisingly calm about the prospective news of whether her tumour was cancerous or not.

5 days later she found out that the tumour was benign. The emotion was overwhelming and she burst into tears with relief. The emotion continued to surface and she was teary on and off for the next week.

“For me it was a good reminder of how your emotional self is reflected in your physical body and vice versa – there is always work to be done. 2 weeks later I was allowed to swim in the ocean and have saunas. I was back at it asap and I am feeling great. I actually meditate for 20-40 mins during each sauna session which I love.”

6 weeks on (today) Shelley is limited to gentle walks. Shelley is use to being active so the limited physical activity is difficult but she is working with her trainer and has a plan in motion. She has set goals and is feeling very positive about it all. She is very excited to have a few colonics to rid her body of the drugs from the operation and get herself back to good health. One thing is for sure, with Shelley’s commitment to health, ambition, positive attitude there isn’t a doubt she will be up and running (or skiing) through life’s next epic adventure shortly. 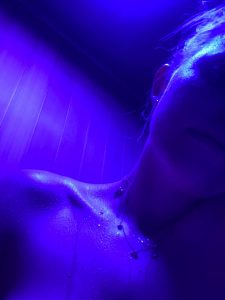 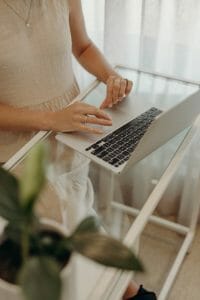 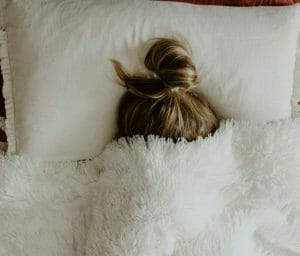